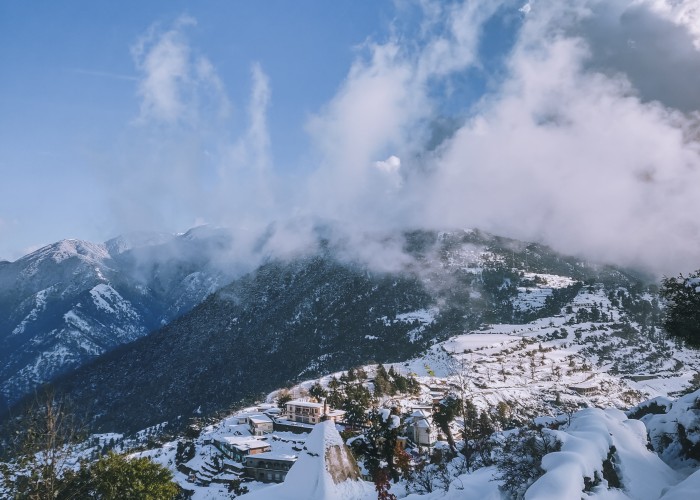 The Indian state of Uttarakhand, which is frequently referred to as the “Land of the Gods,” is located west of Nepal and near the geographic centre of the larger Himalayas. Hindus have long travelled to the Ganga’s origin, which is at the glaciers of the Gangotri Glacier in the Himalayas. Uttarakhand is a great place for trekkers because it is home to Nanda Devi, the second-tallest peak in India at 7,816 metres (25,643 feet), as well as a number of other peaks that rise above 7,000 meters.

The western Garhwal division and the eastern Kumaon division make up the Garhwal Himalayas, as they are also known. Daily flights are available from Delhi to Dehradun, however it still takes a few days to go through rough mountains to reach the mountains. People travelling into the mountains can stop in the small town of Rishikesh, which is located at the foot of the Himalayas and along the banks of the Ganges. April through early June and then again in October and November are the best trekking seasons. Check out some of the fabulous treks in the area below.

The Gangotri Glacier, one of the biggest in the Indian Himalayas and the source of the Ganges River, is accessible through a short (4–5) day journey from Gangotri. It is a well-known trek that is frequently taken as a religious pilgrimage. The Ganges River originates at the end of a glacier, and its name, Gomukh, which literally translates to “cow’s snout,” relates to this location. Fantastic views of Mount Shivling and the Bhagirathi peaks are available. Although not extremely tall by Himalayan standards, Mount Shivling, 6,543 m / 21,467 ft, is exceptionally attractive and was sometimes referred to as the “Matterhorn” by Europeans who first travelled the area. Its name refers to the sacred symbol of Lord Shiva. For hiking around the Tapovan (meadow) to the various peaks and up the glacier, an additional three or four days can easily be added.

This quick 4-day trip departing from Rishikesh is a fantastic choice if you only have a short period of time. The trip to the trailhead at Sari village takes a little more than a half day. Deorital Lake, which offers beautiful vistas and good campsites, is reachable after a simple 45-minute hike. The second day brings you to Chopta and then on to Chandershila’s top, where you’ll get stunning views of Chaukhamba, which is 7,000 metres or higher in the distance. The trek presents no acclimatisation problems because the entire hike offers breathtaking views of the Himalayas and the high point at Chandershila is 4000m. Expect the hills to be pink from the blooming rhododendrons if you visit in April.

In contrast to the other treks listed, this one is best done during the monsoon when the flowers are in full bloom and takes 4 or 5 days to complete. It takes you to the Himalaya’s most well-known area for wildflowers. Trekkers should plan ahead and be prepared for a lot of rain. Thankfully, the flowers’ beauty makes up for it, and guests may stay in one of the lodges at Ghangria to avoid the rain at night and keep dry. The first day of the walk is spent climbing to the little settlement of Ghangria, which begins at Govind Ghat.

The “haunted” lake of Roopkund (4450m/14600ft), which is famous for the human skeletons that may be found in the lake, is the destination of this gorgeous 6-day journey. According to local lore, the lake is home to several hundred people’s prehistoric remains. It’s a stunning journey even without the mystery surrounding the lake. The trail begins in a thick forest of oak and rhododendrons before rising above treeline, where hikers can enjoy breathtaking views of Trishul, Nanda Ghunti, and Badrinath. Since Paleolithic human skeletons and horse remains were discovered here, this location is sometimes referred to as the “mystery lake.” A glacier covered in rocks and peaks covered in snow around the lake. The trek begins in Lohajang, which is conveniently accessible by motor from Almora. The Ghat, which is located on the main Badrinath highway and is connected to Nandprayag by a motorable road, is another option for getting to Roopkund. The Roopkund trek in Uttarakhand travels through verdant grassland and coniferous forest that clings to the hillsides.

This trip is likely to make everyono ascends to Rupin Pass at 4650m/15250ft over the course of six days from the little settlement of Dhaula, located at a remarkable altitude rise of approximately 10,000 feet. The trail passes through the little town of Jakha on the way to the pass, where residents pursue the Satsang path, which is a path to inner truth. Another amazing location for trekking in Uttarakhand is the Rupin Pass Trek, which starts from Dhaula. Some of the most beautiful sights in the area may be seen during this journey. Although the walk can occasionally be challenging, it will undoubtedly be worthwhile. It will lead you to some breathtaking landscapes, snow-capped mountains, uncharted regions, and vast, lovely rivers. On this exciting tour, you will also have the opportunity to interact with the locals.

The only trek described that enters the Kumaon region of the Garhwal Himalayas is this one. It’s an amazing trip through a remote area with breathtaking views of the biggest peaks in this section of the Himalaya, including Nanda Devi, Trishul, and Nanda Kot. To reach the glacier, one must hike along the Pindari River’s banks for six days. The walk is only a little challenging, and the locals highly regard it. The Pindari Glacier trip, which runs from Nanda Devi to the Nanda Kot Peaks, is the best hike in Uttarakhand. The trip, which is in the Bageshwar district, beckons your adventurous side with its surrounding lush and peaceful beauty. The main glacier and forests remain throughout the trek, and in the towns of Almora and Bageshwar, you have a brief opportunity to immerse yourself in the vibrant local culture. One of Uttarakhand’s most stunning treks, it welcomes you with verdant meadows and gushing waterfalls.

This well-known five-day hike commences from the sleepy village of Uttarkashi and leads to the stunning Dodital Lake (3,024 m/9,921 ft) and the Darwa Top Viewpoint (4150m). With the exception of the monsoon season from June to August, the journey is possible all year round due to the low elevations. The lake is renowned for its Golden Trout, which can be seen clearly in the water’s pristine clarity. It is surrounded by a forest of oak and rhododendron trees, both of which bloom in April. The water of Dodital Lake is thought to have therapeutic qualities and was named after Dodi, a common fish found in the lake. People suffering from persistent skin conditions should take a swim in the lake. It is said that the water might aid in skin clearing. Uttarkashi and the Dodital lake are separated by 32 kilometres. During the breeding season, many Himalayan birds visit the lake area, making it a great place for trekking and bird-watching in Uttarkhand. Views of the Bandarpunch and Swargarohini ranges can be seen from Darwa Top. Also explore about Kedarkantha Trek and Brahmatal Trek.